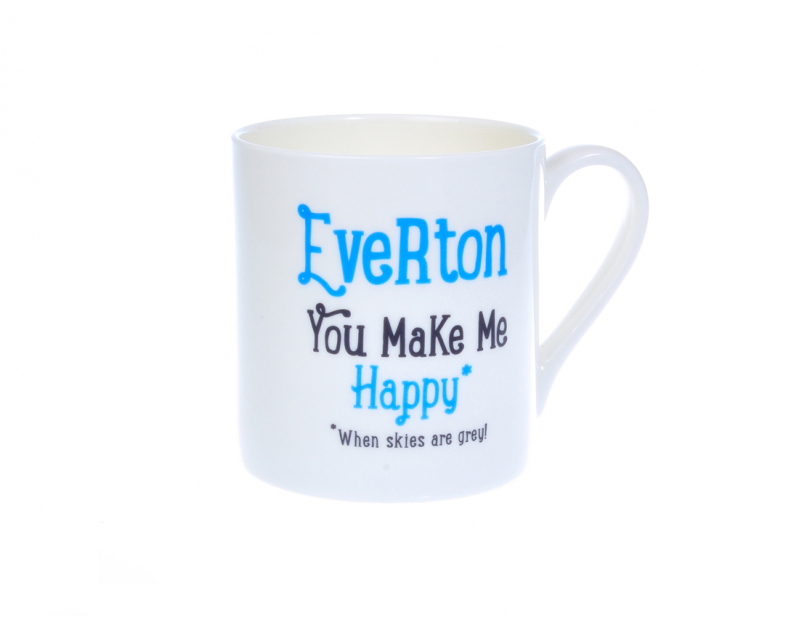 Everton Mug – ‘You Make Me Happy’

Celebrating one of Liverpool’s fantastic football clubs, Everton F.C., this gorgeous mug is the perfect gift for any proud blue.

Goodison Park is the football stadium where one of Liverpool’s two premier league club teams, Everton, resides. It has been the clubs home since 1892 and has an all-seated capacity of 39,592. The name of the stadium – Goodison Park, originated from the fact that the length of the structure was built against Goodison Road. The venue has hosted more top-flight games than any other stadium in England. Also, the stadium has hosted the maximum number of league games since the Premier League was established in 1992. This is because Everton have remained in the top tier of English football since 1954. This Walton based stadium was the first purpose-built football ground in England.

On the day of Goodison Parks official opening, no football was played. Rather, a crowd of 12,000 watched an athletics event which was followed by fireworks and music.

The highest attendance on record for Women’s football was set at Goodison Park in 1920, which was held for 92 years until 2012.

The first football match held at Goodison Park was on the 2nd of September 1892 between Everton and Bolton Wanderers, where the two teams drew 2-2.